The Kick Off Party will be hosted at Doc’s Smokehouse & Craft Beer in Mokena and will provide attendees with great food, a huge craft beer selection and an opportunity to talk to the SSHBA members associated with and participating in the tour. There will also live music from Matt, Zach & Tom and awards for winning builder participants. Tickets for this event can be purchased by emailing info@sshba.com  and are only $35.

The 2017 SSHBA inaugural Tour Of Homes is a free to public event will be held on two consecutive weekends—September 22nd through 24th and September 29th through October 1st that showcases model homes from 15 local builders in communities throughout the south and southwest suburbs. 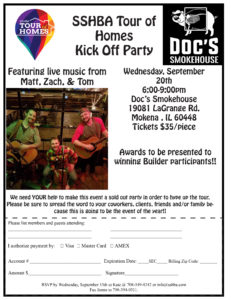