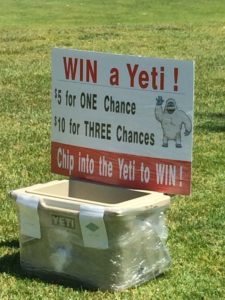 The Southwest Suburban Home Builders Association held our annual golf outing this Wednesday at the beautiful Silver Lake Country Club. Over 57 foursomes descended on the Orland Park club to enjoy a day of golfing, eating, drinking and networking with current and potential association members. They were much more fortunate than last year’s participants as they were blessed with sunshine and temperatures in the low 80s…perfect golfing weather.

From the start we could tell this event was going to be a success. Golfers came dressed in everything from traditional golf wear to jorts and sandals. At the 9:00 AM shotgun start the groups were off to try and tackle the challenging Silver Lakes courses in a best ball format. In addition to playing for pride, there was a prize up for grabs for the lowest overall score in addition to other contests along the way where people could win fabulous prizes.

The two winners of the lowest score were the foursomes from First American Title and Wille Brothers for which they took home a foursome to play Silver Lake again and more importantly get to call themselves SSHBA Golf Champs for the next year. Additional contest winners included:

Men’s Closest to Pin – Dave Landis – A Touch of Green

We as an organization would like to extend a very special thank you to the over 50 sponsor companies, from hole sponsors to breakfast sponsors to the all-important beverage cart sponsors for your support and generosity. This event certainly would not have been the success it was without you.

We hope that everyone that came out to play in this year’s golf outing had as much fun as we did hosting it for you.  As you know a good HBA never rests so we are already planning our 2018 golf outing. If you’re looking for stuff to fill your time until then please join us at one of our upcoming events which can be viewed on the SSHBA calendar.