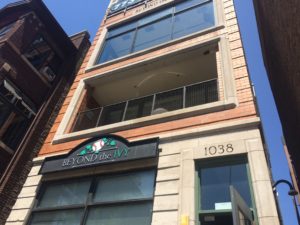 On the morning of July 25th 32 Cub fans, 32 White Sox fans and 1 St. Louis Cardinal fan boarded a bus and headed down to the North Side to take in game 2 of the 2017 Crosstown Cup. With a forecasted temperature of 79 degrees and sunny skies, it was a perfect day for a baseball game. From the second we got on the bus, we all knew this was going to a fun day. The bus started out nice enough, but as the tem went on it became of rival banter. The White Sox fans were in a pretty good mood after winning Monday’s game 3-1, but the Cub contingent were still pretty confident. How could they not be, as they were playing the worst team in the AL and the second worst team in baseball?

Around 12:30 we pulled up to our destination: Beyond the Ivy rooftop. An amazing rooftop venue at 1038 Waveland, located just outside of Wrigley Fields’ left field wall. We unloaded and the bus and everyone went in to stake out their seats for the game. Some chose to go all the way up to the roof to get the full baseball experience, while some chose to hang out in the club area where they could enjoy the A/C and watch the game live or on TV.

Throughout the game, SSHBA members were offered amazing food and drink options through Beyond the Ivy’s all-inclusive menu. People dined on steak, chicken breasts, Italian Beef sandwiches and burgers along with a variety of side dishes like pasta salad and fruit. Of course there was also more traditional ballpark food available in the form of hot dogs and nachos.

As the afternoon wore on it became apparent that to most, what was happening on the field was not as important as the conversations that were taking place off it. Everywhere you walked you saw people eating, drinking, talking, laughing and just having a great time which is exactly what SSHBA events like this are for. At the end of the day though, it was Cub fans that really had a reason to smile as they wound up winning the game by a score of 7-2.

Thank you again to everyone who was able to join us for this fantastic event.